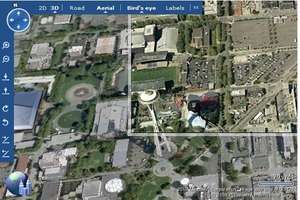 Bing Maps 3D is a freeware Bing software app filed under mapping and made available by Microsoft for Windows.

The review for Bing Maps 3D has not been completed yet, but it was tested by an editor here on a PC. We have found that this software contains advertisements or other ad-supported elements during runtime.

If you would like to submit a review of this software download, we welcome your input and encourage you to submit us something!

View maps in 3D, and tour and save collections to video

The 3D maps feature lets user see buildings in 3D, with the added ability to rotate and tilt the angle in addition to panning and zooming. To attempt to achieve near-photorealism, all 3D buildings are textured using composites of aerial photography. To view the 3D maps, users must install a plugin, then enable the "3D" option on "Bing Maps". In addition to exploring the maps using a mouse and keyboard, it is possible to navigate the 3D environment using an Xbox 360 controller or another game controller in Windows 7 , Windows Vista or Windows XP.

Formerly, roughly 68 cities worldwide could be viewed in 3D, including most of the major cities in the United States and a few cities in Canada, the United Kingdom, and France.

This download is licensed as freeware for the Windows (32-bit and 64-bit) operating system on a laptop or desktop PC from mapping without restrictions. Bing Maps 3D 4.0.1003.8008 is available to all software users as a free download for Windows 10 PCs but also without a hitch on Windows 7 and Windows 8.

Compatibility with this Bing software may vary, but will generally run fine under Microsoft Windows 10, Windows 8, Windows 8.1, Windows 7, Windows Vista and Windows XP on either a 32-bit or 64-bit setup. A separate x64 version may be available from Microsoft.

Ranking in
Mapping Software
#22 of 38